Racingline VWR15G501 Transmission Mount (Gearbox Side) – Golf 5 6 A5 platform 2.0
(This item is part of the full Racingline Uprated Mount Set)

WHAT THEY DO.
To harness your power increases, and transfer that power to the track where you need it, our Uprated Drivetrain Mounts will give a much more solid drive, and crucially add durability to any high-powered or hard-driven car. The whole engine and gearbox (the drivetrain) is located in just three places. The two upper mounts support the entire weight of the engine/gearbox, plus a third Lower Mount underneath the engine. Our Uprated Drivetrain Mounts are a CNC-machined, fully engineered replacement set of three mounts designed to greatly decrease engine and transmission movement, ensuring clean transfer of power to the track.

The risk of wheel-hop under hard acceleration is almost eliminated as the whole engine and ‘box assembly is firmly prevented from juddering when wheelspin occurs and through aggressive gearchages. Available as a Lower Mount only for fast road use, and a full set of 3 Drivetrain Mounts for track/dragstrip/very high power cars.

TRANSFORM THE DRIVE
Transform the drive through eliminating wheel-hop off the line and through aggressive gearchanges.

FULL SET
High-powered, track or hard-driven cars, should have the full Uprated Mount Set as the ultimate choice.

There are no reviews yet.

Only logged in customers who have purchased this product may leave a review. 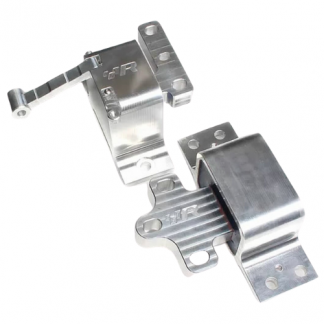